The Best of Intentions

You know what they say about those, right? Well, it seems that we ran smack-dab up against that particular wall recently. But perhaps I’m getting ahead of myself. Let me ‘splain.

When we began our GiggleBake Experiment beta program at the beginning of this year, we were delighted with the way it unfolded and the enthusiasm our GiggleGift Boxes were greeted with. SO excited, in fact, that we made plans to uproot and relocate to a familiar place with many more available resources to make our “official” – “hey, we’re real and licensed and everything now!” GiggleBake launch happen. (Say what you will about how gorgeous Vermont is – we were living in a rural area that made ‘Advancements in Giggling’ far too difficult and costly. Even if it was only 25 miles from our personal mecca – King Arthur Flour.)

Plans were in the works. Things were happening. Dates were set. October 2016 was our goal! In fact, we were right on the verge of some major “woo-hoo!”-ing and awkward high-fives, when……….this: 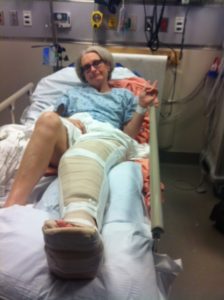 That right there is a great view of Massachusetts General Hospital in Boston. Oh, and also of Janine – one of the primary GiggleBake geniuses. Looks like fun, huh?

Actually, not so much. (And let this be a lesson of what happens when you try to enjoy the 4th of July weekend in Marblehead, MA.) Ninety-minutes into her visit and a slip on the (coincidentally, “marble-like”) rocks on the beach turned into an emergency jaunt to three hospitals, lots of doctors, major surgery, and an injury that would sideline her for the next 6-7 months. As in – “Walking? No – not really. Talk to us in December and we’ll let you  know.”  Yep – as shattered legs go, this one was a doozy. “As bad as it gets.” (Sorta sucks to hear those words from every doctor and previous sufferer of this particular injury that you run across.) Because when the INside of your leg looks like this: 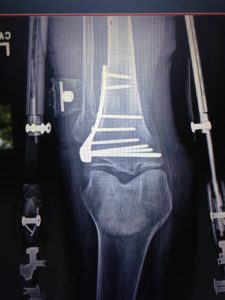 …you can tell it’s going to take some serious time, therapy, and (unfortunately) pain – before you’re going to be back to testing recipes in the kitchen again. (Is it awful that one of my first thoughts was to wonder if they made a handicapped oven?)

Mobility – it’s one of those things you don’t really appreciate…until you don’t have it any more. And a little secret? It comes in especially handy when you need to pack a 2-story house and drive two cars and a truck across the country – literally. (see?) 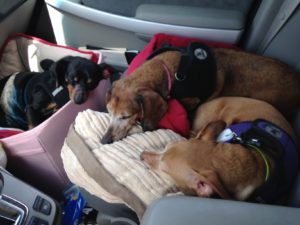 Life goes on. Sometimes it just takes a little detour, has a little hiccup – and your plans need to be adjusted a bit. (despite what John Lennon said.) So although the remaining upright GiggleBaker attempted the super-human effort of relocation and then tackling all the details of that pesky little thing we call “legality” for our exciting venture – it eventually became clear that October 1 was a no-go.

BUT JANUARY 1, 2017 IS A GO! The ducks are lining up, the stars are aligning in our favor – and we are on-target to start 2017 with a whole bunch of GiggleBaking. We’re currently planning our upcoming themes and taking names – and it’s all going to include plenty of chuckles and chortles. Hell, we might even guffaw – and we’re not afraid to admit that jigs aren’t out of the question, either. (Come to think of it, 2016 has pretty much sucked anyway.)

I’ll be posting more updates on a MUCH  more regular basis – now that the whirlwind has died down and things are returning to normal. Sort of. Soon, we hope. At the moment, Janine is still wheelchair-bound – but is making progress with physical therapy and able to hobble around a bit on crutches. She’s looking forward to throwing those crutches and her chair aside and screaming “I’m healed!” at the top of her lungs right around New Year’s Eve (which is what I envision, but apparently her doctors and therapist don’t see it quite that way. I just consider them to have limited imagination). Okay – maybe it’ll take a few more weeks after that to get ALL of her mojo back. But she’s well on her way and we’re all very optimistic.

For the moment, we’d love it if you could help spread the word that GIGGLEBAKE IS ALMOST HERE! It’s going to be the adventure of a lifetime for us – and it would be awesome to share it with all you like-minded “I-don’t-want-it-if-it’s-not-Perfect” OCD-types. You know – the ones just like us.

P.S. And a note to you beta-folk out there . . . we’re working on your holiday GiggleGift before the end of the year, too. We thought it would be a great way to close out 2016 with a little freebie-fun one more time, eh?